For the first time in months, gold is back in an uptrend.

Using intraday prices, gold finally punched above its 200-day average for the first time since the start of February. That ends the longest stretch below the 200-day since late 2018. After it regained its average then, it rallied for another couple of months before giving almost all of those gains back, and then finally managed to roar ahead.

The several months below its 200-day wasn't gold's longest stretch in a downtrend by any means, but it was one of the longer trends in the past 20 years. 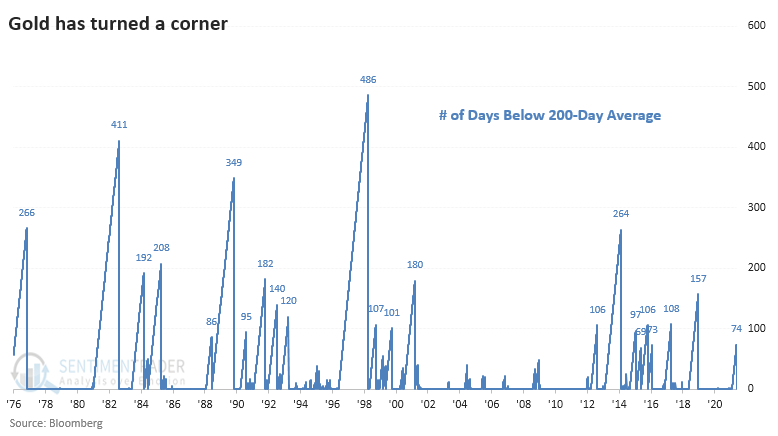 We've seen before that gold has a tendency to be trendy, and attempted reversals in long-term trends aren't very sticky. Medium-term returns weren't kind after the 22 other times gold attempted this kind of trend change.

Over the next 6 months, gold showed a positive return only 32% of the time, and all the other stats were poor. Gold mining stocks also had a tendency to see more selling than buying pressure.

The post titled After These Signals, Gold Usually Couldn't Hold was originally published as on SentimenTrader.com on 2021-05-19.