An August High As Option Speculation Ramps Up

Stocks ended August at their highest monthly close in at least 36 months. A new high in August has preceded poor returns during the next 1-4 weeks as September lived up to its reputation. The S&P struggled to hold its gains, especially during the past 30 years.

Last week, options traders focused heavily on bullish strategies. The ratio of bullish to bearish ones was one of the highest in more than 5 years, as both small and large options traders spent a large part of their volume buying call options. 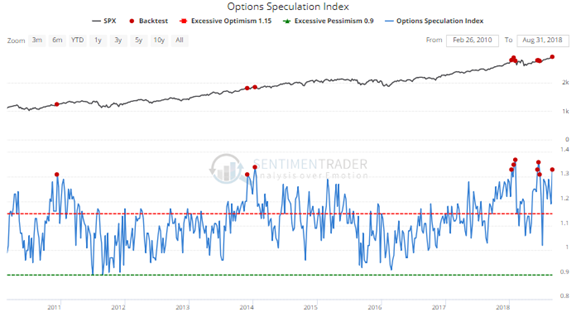 Gold mining stocks suffered yet another large loss and a 52-week low. That’s 6 such losses in 20 sessions, among the largest selling clusters in 25 years.

The battle for most-hated commodity seems to keep alternating between coffee and one of the grains. The record pessimism toward the former has eased a bit, leaving soybeans holding the current title for most-hated.

The post titled An August High As Option Speculation Ramps Up was originally published as on SentimenTrader.com on 2018-09-05.