Earnings down, stocks up

Earnings for S&P 500 companies are projected to be flat or negative from the same quarter last year. Even with the slowest growth in 3 years, stocks have been ticking to new highs.

There was a hint of “whistling past the graveyard” in those rallies, as the S&P ended up running into trouble several times, especially in recent decades. And when this has triggered in the 2nd quarter, the S&P has struggled to hold its gains over the next couple of months.

Shipping up, gold down

The Baltic Exchange Dry Index shows that shipping companies have been able to raise the rates charged to ship goods, which is usually taken as a good sign of global growth. 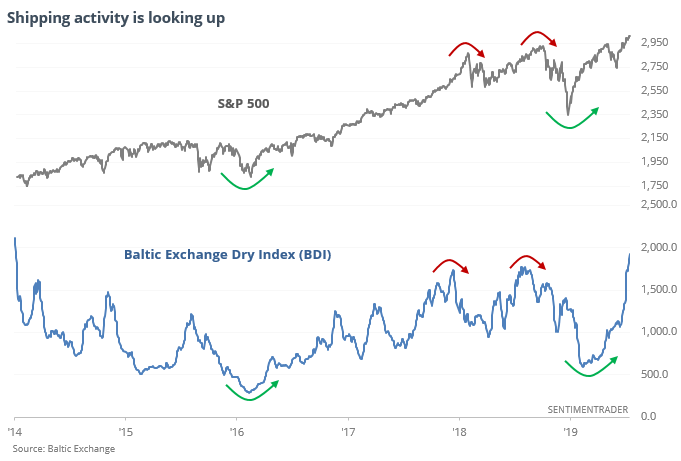 The index just broke out to a multi-year high, but despite a relatively close correlation in recent years, a breakout in the BDI has not been a consistent sign for stocks. For commodities, it was a persistent negative, almost universally so for gold.

Dumb Money Confidence exceeded 80% on Monday. The Backtest Engine shows there have been 151 days with a reading this high in the past 20 years. The S&P’s annualized return was -22.3% following those days. Over the past 7 years, all 25 days showed a negative return a month later, averaging -3.0%.

For those gazing up at Tuesday’s Buck Moon (full moon in July), it hasn’t been such a great sign for stocks. After all 5 of full moons in July over the past 20 years, if the S&P was at or near a high, it fell over the next 1 or 2 months.

The post titled An Economic Indicator Is Breaking Out - Why That's Bad For Gold Bugs was originally published as on SentimenTrader.com on 2019-07-17.