An Industrial-Led Rally As Shanghai Surprises

The Industrials sector has led all major S&P 500 groups since the December 24 low, while defensive ones like Utilities have lagged. 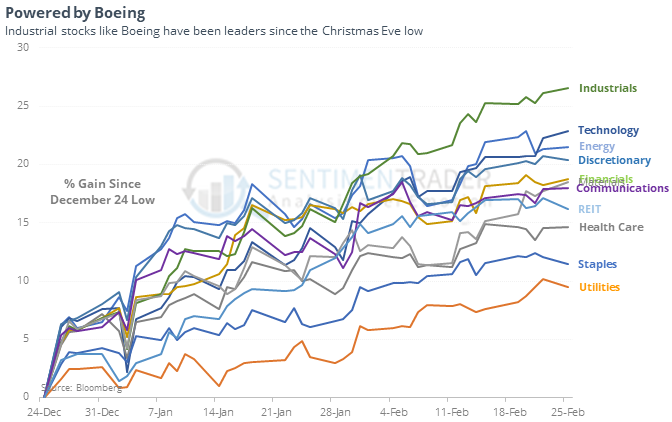 Going back to 1928 and looking at all two-month, 10% rallies from a low, we see that the rallies with the highest sector correlation to our current rally have fared poorly going forward.

Over the next couple of months, the S&P struggled with positive returns only 29% of the time. After rallies with the lowest sector correlation, the S&P did much better going forward.

The move in Chinese stocks to start the week was enough to trigger a number of shorter-term breadth extremes. More than 80% of the nearly 1500 stocks in the Shanghai Composite hit 1-month highs, with many moving also becoming overbought and moving beyond their volatility bands.

That has preceded short-term weakness each of the few times it triggered.

The Commitments of Traders report was released, covering positions through February 12

Remarkably, “smart money” hedgers continued to buy index futures, building to a $23 billion net long position. They’re mostly neutral in other contracts. In silver, they’re now holding about 35% of the open interest net short, on the low end of their range over the past 7 years, a minor negative.

The post titled An Industrial-Led Rally As Shanghai Surprises was originally published as on SentimenTrader.com on 2019-02-27.