A bear market in stocks

While the major indexes are far from a 20% decline, many S&P 500 components have declined more. At the depths of the decline in October, more than 40% of the S&P reached bear market territory. 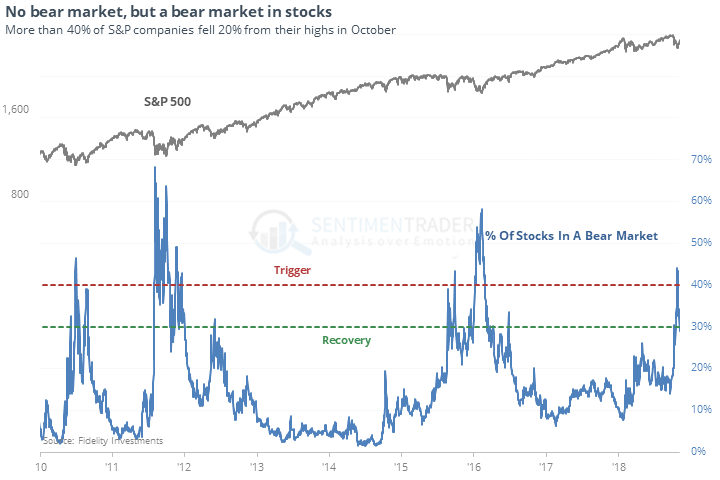 That often served as a low point historically, but with false signals in 2001 and 2008. The biggest problem was multiple false signals in 2001, when there was a spike of more than 40% of companies falling into bear markets, then a recovery back below 30%. Soon after that, though, the S&P topped out and headed to new lows.

The only way to avoid those was to wait for an even more stringent recovery. Waiting until fewer than 15% of stocks were in a bear market was helpful.

One of the longest streaks in the history of the Russell 2000 is on the verge of ending. Its 50-day average is close to cross below its 200-day for the first time in more than 600 sessions. 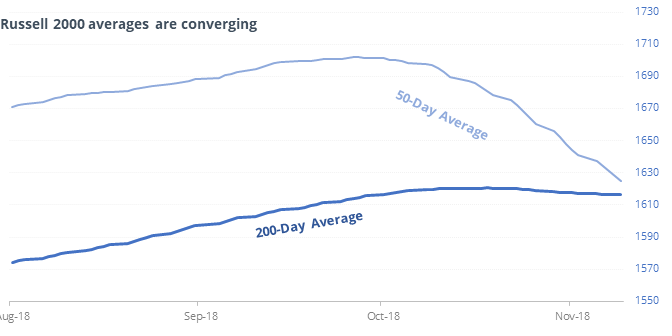 The ends of other long streaks preceded some tough markets, especially shorter-term.

The 3-Year Min/Max Screen shows that “smart money” hedgers added to their already-extreme long position in orange juice but there were no new extremes of note.

The 10-day Optimism Index of the Consumer Staples XLP fund is at 77. There have been 34 days in its history with this high of a reading.

The post titled Bear Market In Stocks; Small-Cap Stumbles was originally published as on SentimenTrader.com on 2018-11-12.