CFOs Are Getting More Confident (But Their Bosses...)

In recent quarters, corporate CFOs have become more optimistic after a long time expecting declining conditions. At the same time, their bosses (CEOs) have continued to edge further into cautious territory. For CFOs, they're nearing their first quarter of net optimism in years.

When we combine CFO and CEO optimism into a single measure, we can see that overall, they're still more cautious than they usually are. And while there is a strong tendency to consider these insiders to be prescient, there isn’t a lot to conclude from this. Their caution was a great warning ahead of the 2008 meltdown, but other than that, their behavior has been more like Chicken Little than Carnac the Magnificent.

The U.S. stock market was among the first to breakout to new all-time highs this year. And now amidst a stream of positive trade war developments, indices that were more beaten down by the trade war (e.g. emerging markets) are also making new all-time highs. For example, the NYSE Composite Index just broke to a new high.

When it did so in the past, the NYSE Index typically rallied over the next 3 months and 1 year, as did the S&P 500. 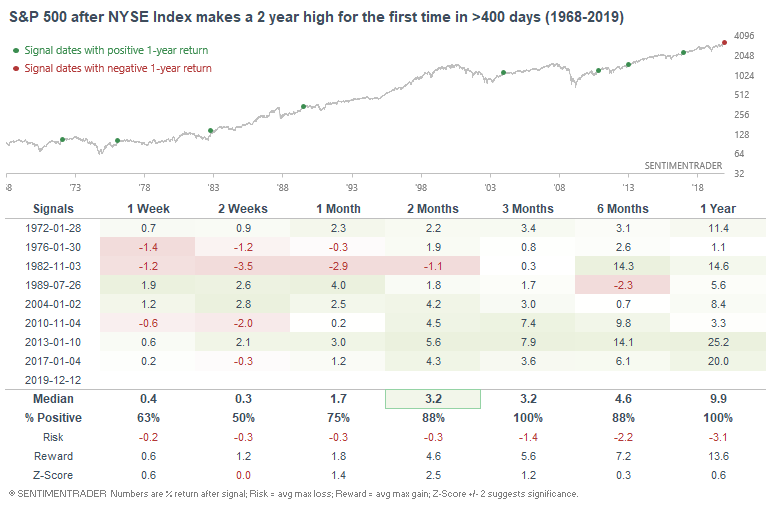 While the sample size is small, it's hard to ignore a perfect record.

The post titled CFOs Are Getting More Confident (But Their Bosses...) was originally published as on SentimenTrader.com on 2019-12-13.