Last week, we saw that there has been a remarkable thrust in breadth among global markets.

But not everyone is participating. Appetite for trading in China has wanted, as Bloomberg recently noted. The lack of enthusiasm is even more pronounced among those trading on margin. Turnover in margin accounts over the past month has sunk dramatically.

It's not hard to see why. The average stock in that market has been declining for months, even if some of the major Chinese indexes have held up despite that deterioration. The Cumulative Advance/Decline Line for the Shanghai Composite is challenging its 5-year low. 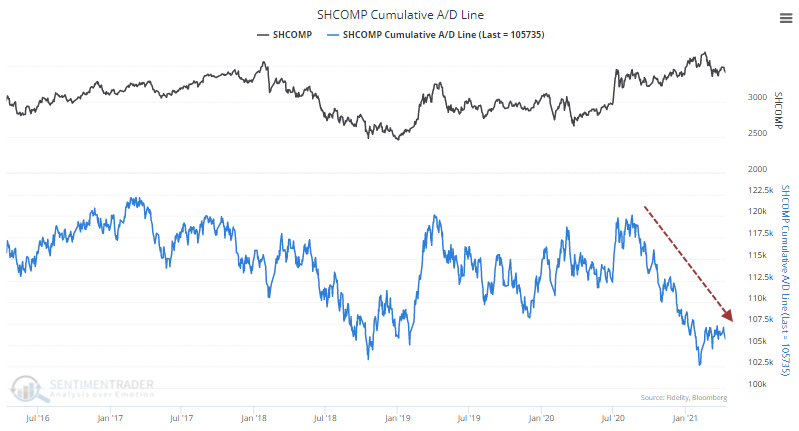 This activity has pushed the McClellan Summation Index for the Shanghai below zero...and kept it there. This is exactly the opposite of what we see in a healthy market environment.

We're seeing similar behavior when looking at the percentage of stocks in the Shanghai that are trading above their moving averages. Even so, investors in large-cap China funds like FXI are showing optimism, not pessimism.

The post titled Chinese stocks haven't done this for 5 years was originally published as on SentimenTrader.com on 2021-04-15.