Confidence Has Flipped From Dumb To Smart

Usually by the time the spread between them has flipped after several months, stocks were seeing the last bits of selling pressure.

With one major exception, these were mostly good signals for stocks. It triggered right as stocks were peaking in 2000, leading to more than a 30% loss over the next year. That’s a worry.

But that’s the only signal that led to anything more than a 5.2% loss at the worst point over the next three months, while there were 9 signals that led to a gain larger than that at the best point.

After sliding to a multi-month low, S&P 500 futures gapped down on Wednesday and never recovered, leaving an open gap. These can morph into “breakaways” where prices never look back. 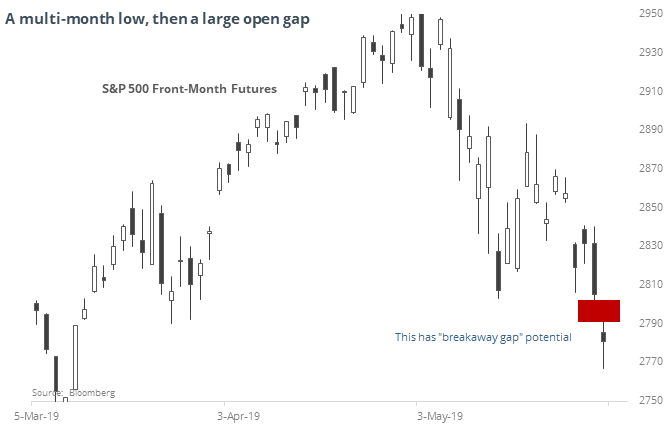 But under similar conditions, that was very rare. While it has taken a long time to close the gaps, future returns were very good.

The latest monthly Consumer Confidence figures show that consumers have high confidence in their current conditions, and few expect stocks to decline.

Stocks have done well under these conditions and tended to suffer only when these measures started to roll over.

Over the past month, options traders have bought to open fewer than 75 calls for every 100 puts on the ISE exchange. In the past 17 years, this kind of hesitancy has happened only twice, in August 2015 and May 2016 according to the Backtest Engine.

Oversold in an uptrend

The McClellan Oscillator for staples is below -100 while the fund is still above its 50-day average. The Backtest Engine shows that the fund rose 96% of the time a month later.

The post titled Confidence Has Flipped From Dumb To Smart was originally published as on SentimenTrader.com on 2019-05-30.