Concerns about an economic or earnings recession have skyrocketed over the last couple of months, and disappointing economic reports worldwide are not helping. Economic surprise indexes across the world are all below zero, and the most negative in two years. 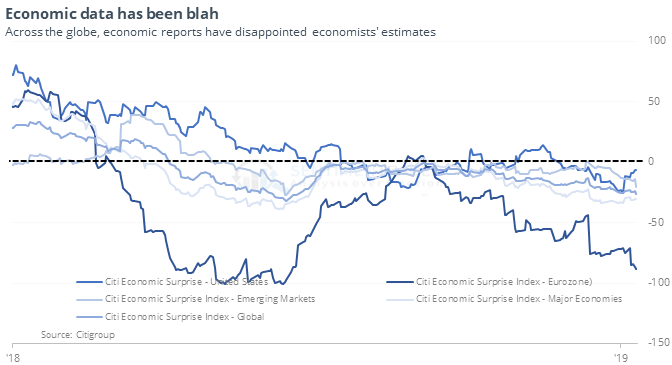 By the time it got this bad over the past 15 years, though, most of the weakness in stocks was already past. Except for late 2007 and arguably again in the fall of 2008, it did not pay to become disappointed along with the economists. It was a little less convincing in other country or emerging market stocks.

The leading economic index from ECRI is showing significant weakness, the most in 6 years. Its record at leading an actual economic recession is mixed when it gets this low - in four cases, a recession had already begun, in two cases, it preceded a recession by at least 10 weeks, giving a nice heads-up, once, the WLIW never got this low before a recession occurred, and twice, it dropped this much and the economy never tipped into recession

Even so, it does tend to precede weaker-than-average stock returns when getting this low. Bonds, on the other hand, have tended to react very well going forward.

The smallest of options traders are still nervous about this market. Last week, they continued to buy a relatively large number of puts, spending 24% of their volume on protective put purchases.

The post titled Disappointed Economists; A Weak Leading Index was originally published as on SentimenTrader.com on 2019-01-15.