Indexes soar, but fewer stocks are coming along for the ride

Major indexes, especially those heavy with tech stocks, are driving higher. Yet fewer stocks are coming along for the ride.

We already know how much influence the top 5 stocks are having on the broader indexes, with a record increase in their weighting over the past year. That masked some troubling participation problems a couple of weeks ago and continues to do so now.

Friday's session ranks among the worst-ever for Up Issues and Up Volume when the index gained 0.5% or more. There was a day in April that was even worse, but that was during a historically volatile period, with other days showing massive positive breadth thrusts and recoveries. We're in a dramatically different environment now.

Since 1990, the S&P Tech sector has hit a 52-week high on 768 sessions. On those days, an average of 82% of stocks within the index closed above their 50-day moving averages. On Friday, only 76% of them did. That doesn't seem like a big difference, but it ranks in the bottom 25% of all readings. Same goes for the percentage trading above their 200-day averages. The percentage hitting a 52-week high was also abnormally low. 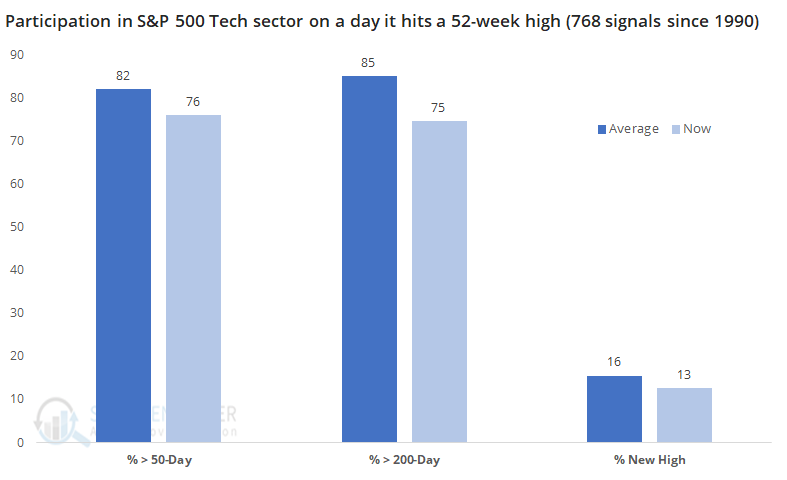 The post titled Indexes soar, but fewer stocks are coming along for the ride was originally published as on SentimenTrader.com on 2020-08-04.