Investors Ease In As FedEx Crashes

Individual investors are easing back into stocks. The latest AAII survey shows that the Bull Ratio has cycled from extreme pessimism to modest optimism.

A raging buy signal it was not, but the S&P 500’s returns going forward were above random on all time frames, and well above over the medium-term. The only true failures were during the financial crisis when it looked like stocks were bottoming and investors moved in, then that bottom fell out.

Options traders are pricing in significantly higher volatility for the small-cap Russell 2000 than the large-cap S&P 500 over the next 30 days. The difference between them is now the highest in over a year.

For the ratio between the two indexes, it was a mixed sign. The Russell under-performed the S&P over the next 2-3 months, but out-performed from 6-12 months later. Both the Russell and S&P tended to rise over most time frames.

The drop in FedEx on Wednesday scared folks into believing it could be an early sign of a shipping slowdown, perhaps a sign of slipping economic conditions. It’s hard to read all of that into a single day’s price action of a single stock, though. As Troy notes, FedEx has dropped 10% in a single session 11 times in the past 40 years, and 10 of them led to higher returns in the S&P 500 6-12 months later. 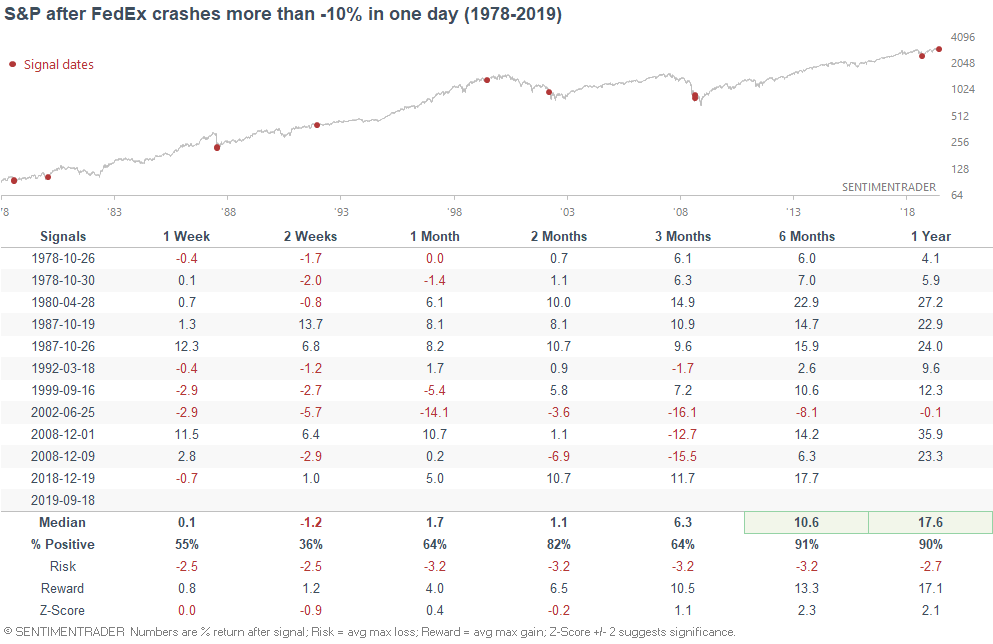 As CNBC noted, "a survey of 225 chief financial officers by Duke University shows pessimism on the U.S. economy has been growing steadily this year ". This is due to a global slowdown in growth (particularly outside the U.S.), combined with Trump's ongoing trade war.

The following chart illustrates what % of CFO's are more pessimistic about the U.S. economy.

The post titled Investors Ease In As FedEx Crashes was originally published as on SentimenTrader.com on 2019-09-20.