Another survey of Wall Street strategists shows that even more of them are lukewarm on the prospects for stocks in 2020. Their average guess is for the S&P to gain a lowly 4%, their smallest estimate in 13 years. Collectively, their estimates are not useful, as stocks gyrate wildly around the median, even including recent years when the gains in stocks were relatively steady. 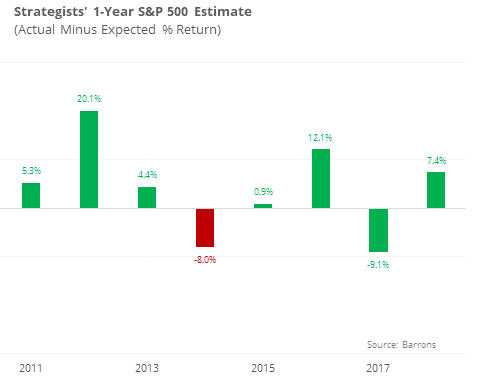 While surely these are very sharp individuals and their reasoning is what investors crave, collectively their price estimates weren’t very useful. It's the price targets and their changes which seems to grab media attention, but they should be avoided as an input.

The skew of S&P 500 options is high, meaning that traders are paying up for far out of the money put options relative to call options. At the same time, a couple of nearer-term indicators of implied volatility are very low. That has pushed the average of the two ratios to the highest point since the summer of 2018.

When this happened before, stocks ran into some trouble at some point, but that “at some point” was not consistent. The VIX, though, consistently spiked within the next 3 months.

The post titled Maybe Strategists Are Betting On Black Swans was originally published as on SentimenTrader.com on 2019-12-18.