Nobody Wants to See This Kind of Climax

On Friday, nearly a third of stocks in the S&P 500 managed to hit a 52-week high on that day alone. Then it skyrocketed to a stunning 78-year high on Monday.

Monday was odd in many respects, not the least being another surge in stocks setting 52-week highs. More than 44% of S&P members notched a high in the morning, the most since 1943.

The burst of gains and push to new highs early on Monday was reversed during the session, causing a spike in the number of stocks suffering a buying climax. This is triggered when a stock hits a 52-week high then reverses to close below the prior day's close, potentially a sign of exhaustion among buyers.

Our Backtest Engine shows that this is the 6th-largest number of climaxes in a single day since the inception of SPY. 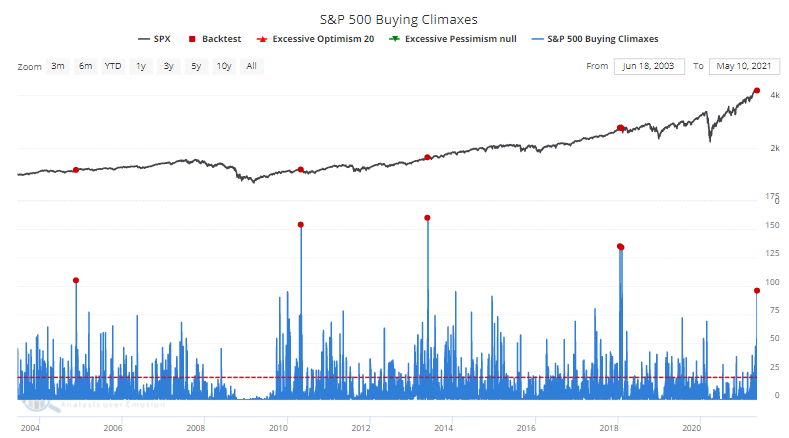 Every time more than 95 stocks suffered a buying climax, the S&P 500 showed a loss over the next 1-2 months. There were few losses over the next 6-12 months, and they were relatively small.

The post titled Nobody Wants to See This Kind of Climax was originally published as on SentimenTrader.com on 2021-05-12.