Markets are demonstrating historic levels of complacency. This may be great if you're a tech stock speculator or a Robinhood 20%-profit-a-month trader, but in the real world this is a dangerous time to throw caution to the wind from a risk:reward perspective.

*If you think we at SentimenTrader are permabears, please simply go through our Twitter feed and look at our bullish tweets from late-March.

I'm going to share almost 20 indicators and charts that are CRITICAL to understanding the market's short term outlook right now. Some of these indicators/charts are new, and others I've covered on Twitter. These indicators focus on the short-medium term. They are not meant for long term investing. So if an indicator is short term bearish for stocks, that DOES NOT mean stocks can't rise over the next year (long term).

We take a weight-of-the-evidence approach to trading that respects the market and examines risk:reward from multiple points of view. While any one of these indicators don't constitute a market call, you should ALWAYS think for yourself if any of these indicators are important. Do not let anyone on the internet (including myself) do your thinking for you. These data points are merely meant to guide you in your trading analysis process. So monitor them carefully and think critically.

So without further ado, we'll look at the following:

The U.S. stock market stalled after June 8. While the S&P may have already pulled back from a potential peak, there is still further downside risk. The stalled rally has triggered a RECORD number of MACD sell signals among the S&P 500's members. While historic extremes could mean that the bull market is just getting started (see early-1990s, 2003, 2009), historical cases all led to short term losses for investors. 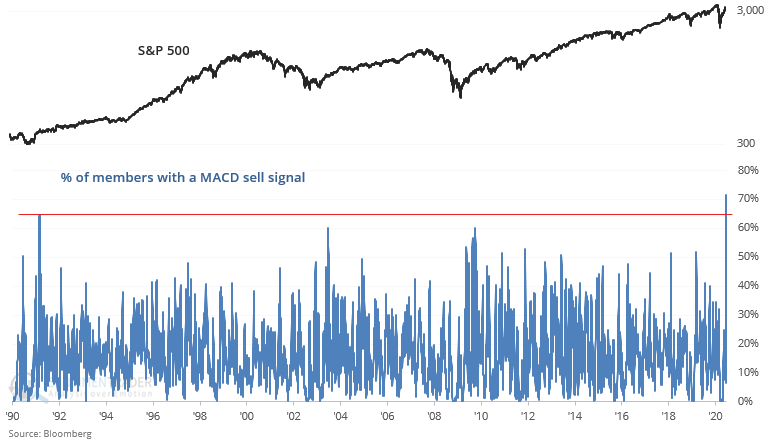 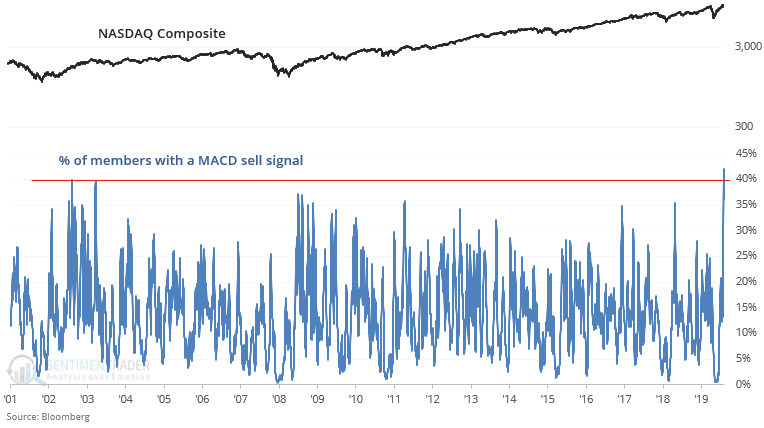 To add fuel to the fire, many overseas equities are rolling over as well. A record number of Euro Stoxx 50 members have triggered MACD sell signals: 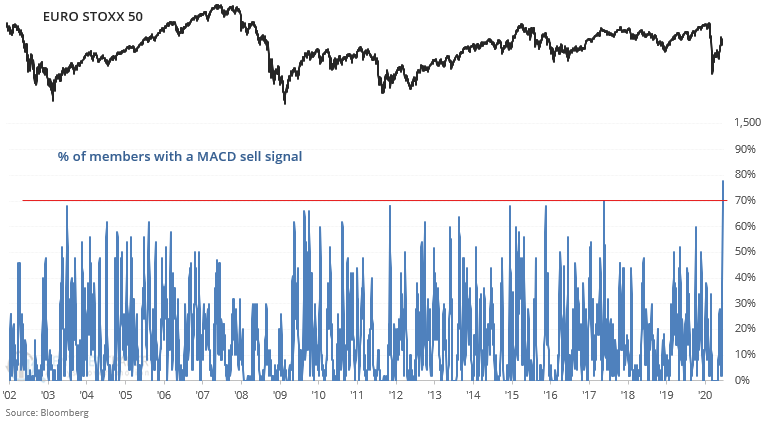 And in Asia, a historic number of Nikkei 225 members have triggered MACD sell signals. 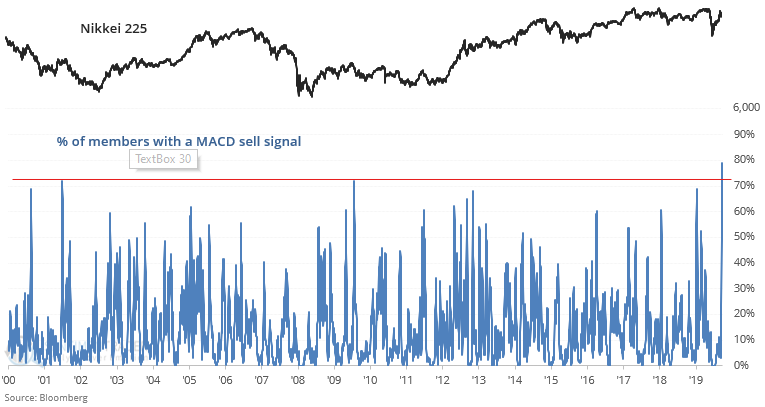 What we're seeing right now is EXACTLY THE OPPOSITE of what we saw at the stock market's bottom in late-March. Back then, a record-breaking % of S&P 500 stocks triggered MACD buy signals. 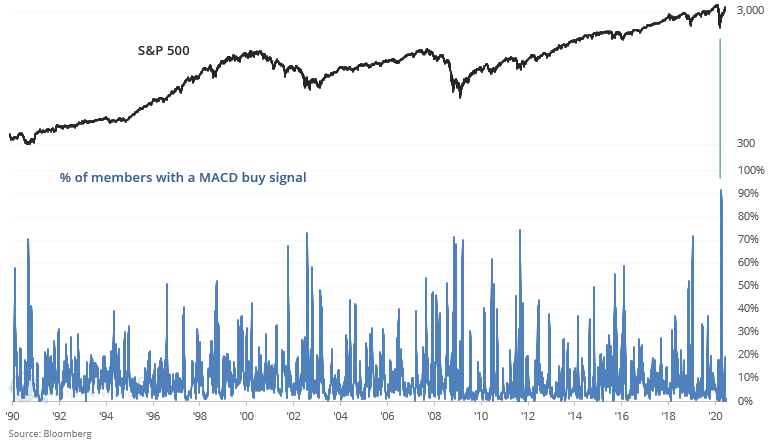 Moving on, let's look at the full-bore bullish options traders.

Options traders have gone balls-to-the-wall long as they bet on a continuation of the stock market's already historic rally. As we've shown repeatedly on our Twitter feed, traders and speculators are buying calls like there's no tomorrow. The Equity Put/Call ratio's 1 month average has reached a level where historically, stocks almost always pulled back over the next 2-3 months: 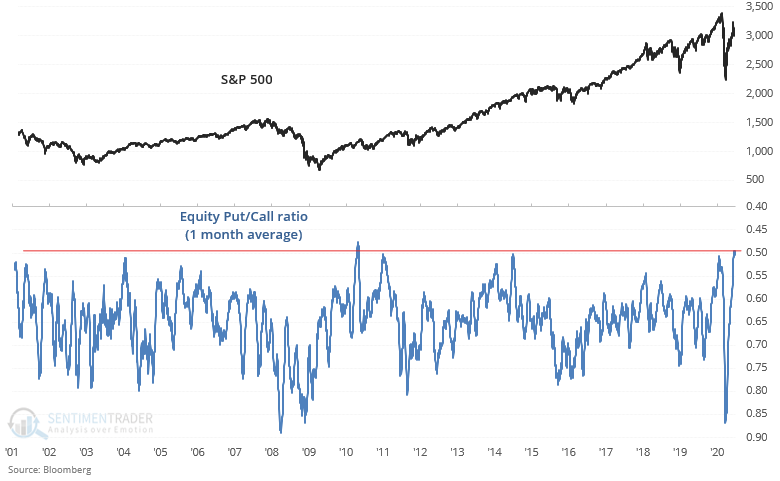 Looking at a different time frame, the Put/Call ratio's 50 day average is equally extreme. The last time this happened was in January-February 2020, just before global equities CRASHED in March. 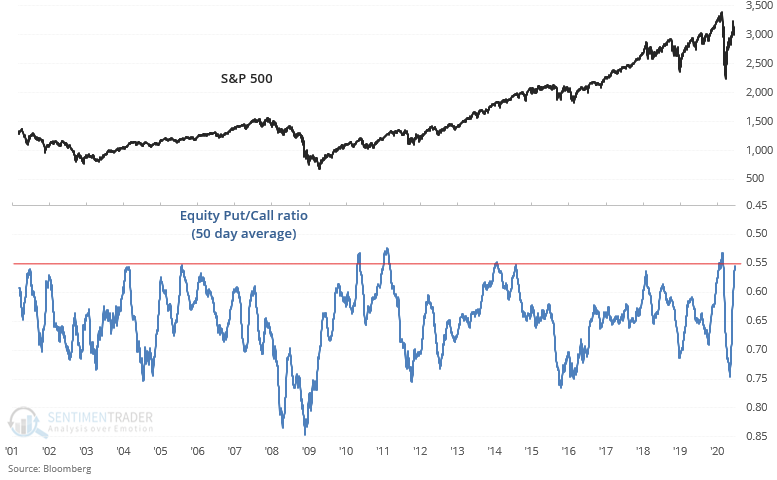 Among the most bullish options traders are small traders, who surely have enjoyed outsized gains over the past few months. The Small Trader Call Buying ratio, which looks at the % of total small trader option volume that went to buying call options, was recently at the highest level in 2 decades! This is eerily similar to the speculative frenzy we saw at bull market tops in 2000 and 2007. 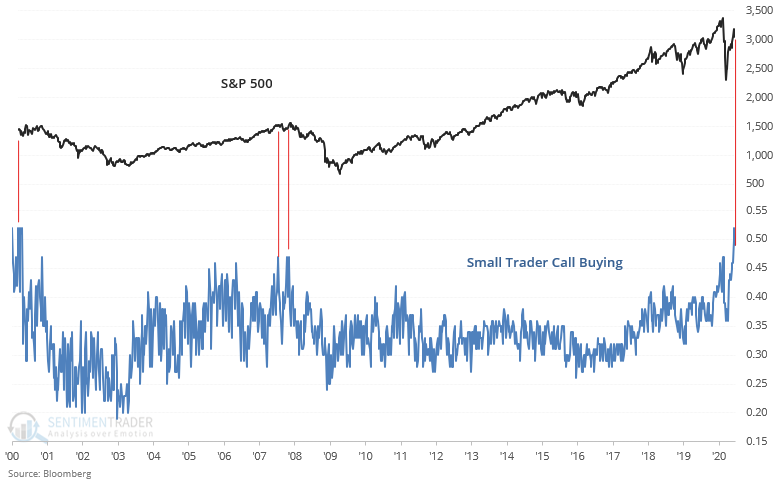 Similarly, our Options Speculation Index, which is a ratio of the total bullish transactions vs. total bearish transactions among all U.S. options exchanges, is at the highest level since the dot-com bubble. Risks are mounting, and bullish options traders could be driving over a cliff. 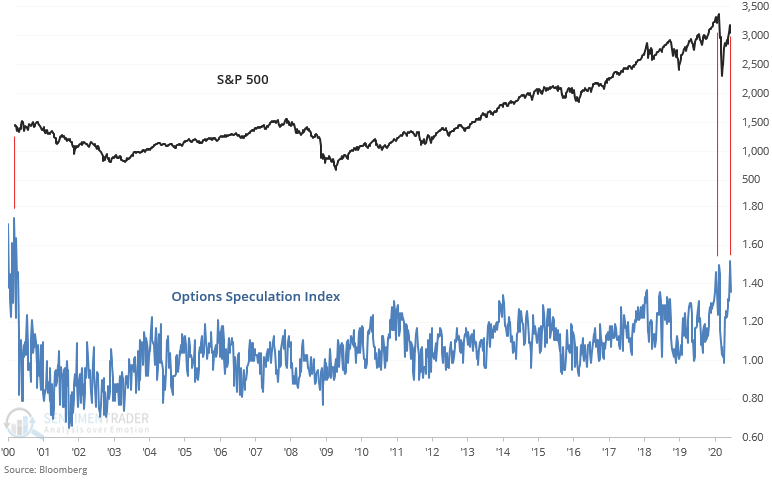 Analysts are chasing the rally

Analysts were recently upgrading their price targets for S&P 500 stocks at the fastest pace ever. Keep in mind that at the S&P's bottom in March, analysts were downgrading at the fastest ever. Prior instances of analysts chasing the rally almost always led to a S&P 500 pullback/correction in the next 2-3 months.

*It's not that all analysts are bad. It's just that like many traders, it's easy to let the market's price guide your thinking (which is dangerous for your trading account). Like our friend Helene Meisler likes to say, there's nothing like price to change sentiment. 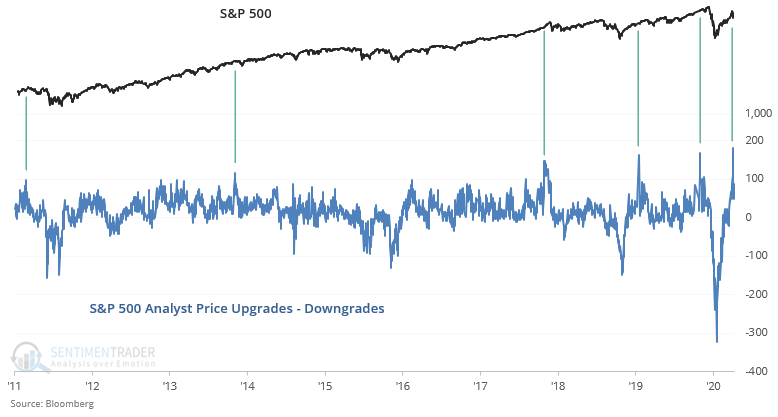 Twitter is an interesting exercise in crowd psychology. Twitter is full of "MARKETS WILL CRASH MUCH FURTHER" comments at market bottoms and "THE MARKET WILL SOAR TO UNIMAGINEABLE HEIGHTS" at market tops. But thusfar, there has been good reason for the bullishness of many traders using Robinhood, Twitter, and Reddit. Stocks, and in particular tech stocks, have rallied nonstop. 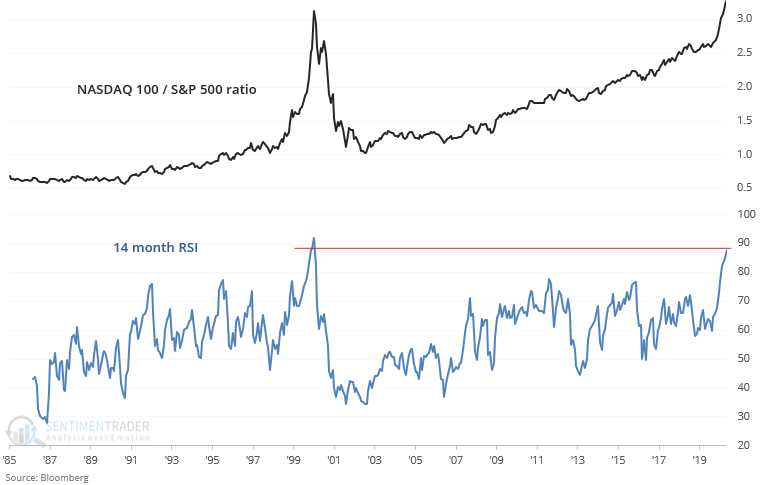 One of the most popular strategies among small speculators is to buy small cap growth stocks. These stocks provide the potential for ENORMOUS short term gains (and also enormous short term risk, but who cares about risk these days right?).

The popularity of small cap growth stocks among Robinhood traders has no doubt been are encouraged by popular Youtube gurus that preach make-2%-a-week make-1%-a-day trading tactics. As a result, the Russell 2000 Growth/Value ratio's 14 month RSI is close to an all-time high. This only happened: 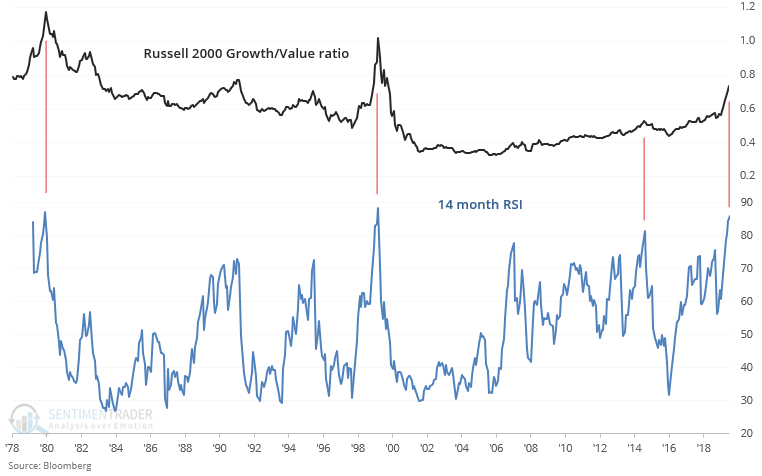 Remember, don't confuse brains with a bull market. As Warren Buffett says, "only when the tide goes out do you discover who has been swimming naked".

As one may expect, the stock market's spectacular rally has pushed various sentiment indicators to sky-high reading. Our CNN Fear & Greed proxy's 20 day average is at a level where over the past 2 years, typically led to a pullback/correction in the market. 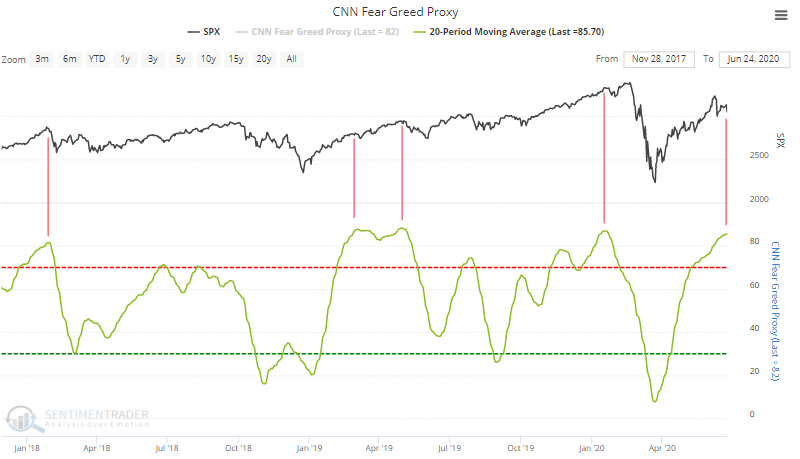 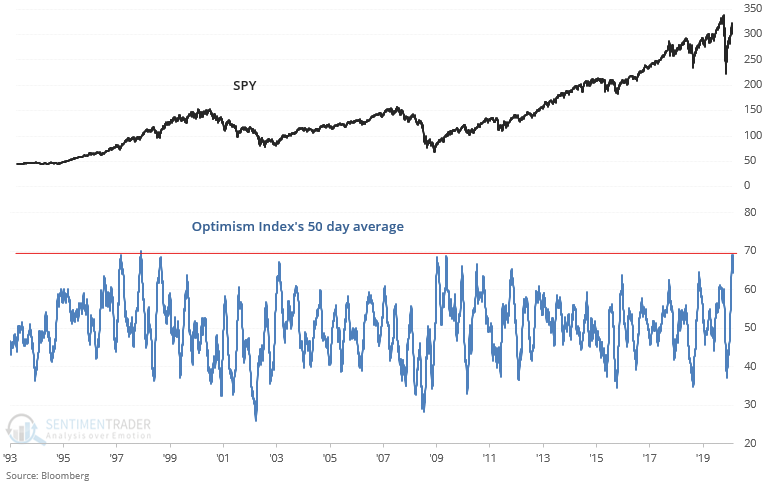 Such high sentiment is putting downwards pressure on stocks, and in particular tech stocks. XLK (tech ETF) optimism Index's 50 day average is at the highest since the dot-com bubble. 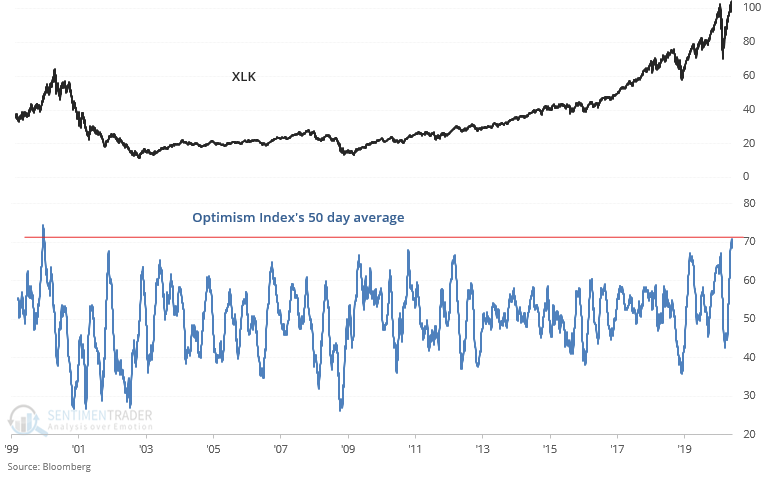 Once again, none of these data points are an outright bearish call. Please consider them for yourself and apply your own judgement. But with that being said, the following charts deserve special attention.

As I noted yesterday, the NASDAQ's rally has been exceptional in that it is more than 16% above its 200 dma (strong rally), while only 45% of its members are even above their 200 dma! This implies that the broad index is being pulled up by a select few members, while most of the index's members can't even reclaim their long term uptrend.

The only other somewhat comparable case (weak long term breadth + strong rally) was in February 2020, just before stocks crashed in March. 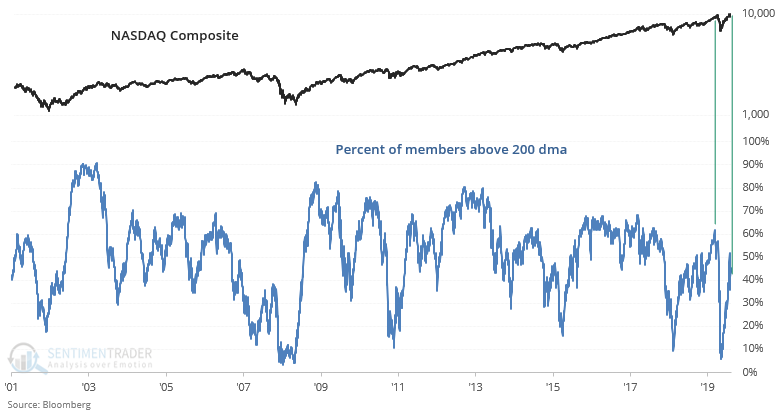 While many stocks were unable to reclaim their long term averages (200 dma), the VAST majority of them were able to reclaim their medium term trends (50 dma). After a record breaking % of S&P 500 members were above their 50 dma, many of these stocks are rolling over and losing their medium term uptrends (50 dma). This development should be monitored carefully and could portent further losses. 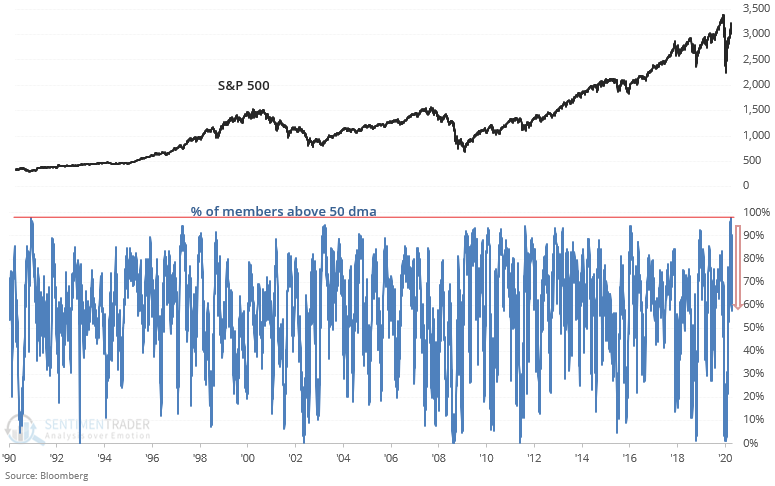 And lastly, investors have gone from GET ME OUT OF EVERYTHING to JUST BUY ANYTHING over the past few months. We don't particularly like fund flow data for individual ETFs since these can be very erratic and noisy. It's far better to look at aggregate fund flow data. The past week saw extremely high inflows into U.S. equity ETFs and mutual funds. In trading as in life, it's better to zig when others zag. 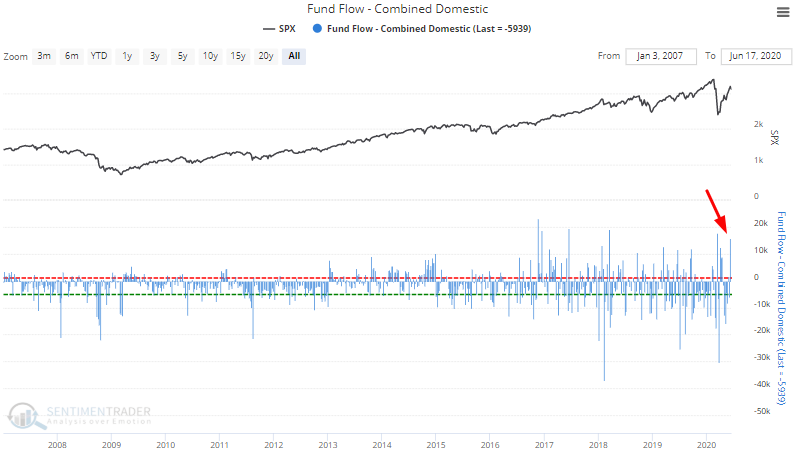 The history books are still being written and no one has a crystal ball. We can't predict anything with 100% certainty - all we can look at is risk:reward and weigh the evidence.

Data, facts, and history tell us that:

I hope these indicators and charts have been useful. Instability is rising in the markets after an epic multi-month rally, so stay vigilant and monitor market developments closely. And as always, stay safe during the current pandemic. Health > wealth

Troy Bombardia and the SentimenTrader team

The post titled Rising Instability After a Historic Stock Market Rally was originally published as on SentimenTrader.com on 2020-06-25.