Sentiment recovers amid an economic plunge

Sentiment is starting to recover. Rising optimism is a good thing, until it gets to the point where it's extreme, and we're a long way from that point.

But rising optimism in a bull market is different from during a bear market, and this is where it gets tricky. During unhealthy markets, this is where the initial rebound starts to find trouble.

Our proxy of the CNN Fear & Greed model just hit neutral territory above 50% after an extended period with record-low readings. Bull markets typically don't see bouts of such extended pessimism, so that's worry #1. Worry #2 is that the pessimism is now gone. When this happened in the fall of 2018, the rallies immediately fell apart. 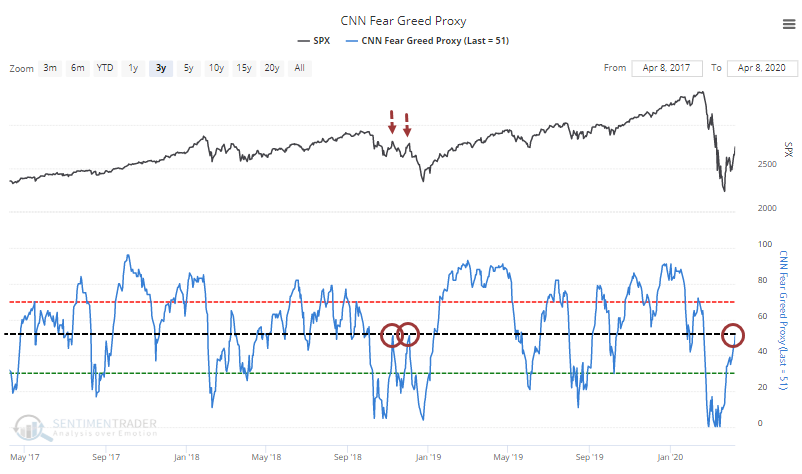 So, here's the test. Is the combination of unprecedented fiscal and monetary stimulus, combined with a record surge in buying pressure and retracement of the decline, enough to offset the idea (probably more like fact at this point) that we're in the midst of a recessionary bear market? Now that sentiment is becoming more neutral, price action becomes even more important. Bull markets take it in stride. Bear markets usually roll right over.

As expected, the coronavirus-driven recession has pushed many economic data series to the lowest level in years (if not decades). A string of horrid economic reports has pushed the Citi Economic Surprise Index to extremely low levels.

For the U.S. Dollar Index, this usually led to losses on all time frames after 1 month.

The post titled Sentiment recovers amid an economic plunge was originally published as on SentimenTrader.com on 2020-04-10.