Small cap stocks, via the Russell 2000 index, are leading the other major indexes in the race to new highs. It’s the only index that has reached a 52-week high in the past 30 days. 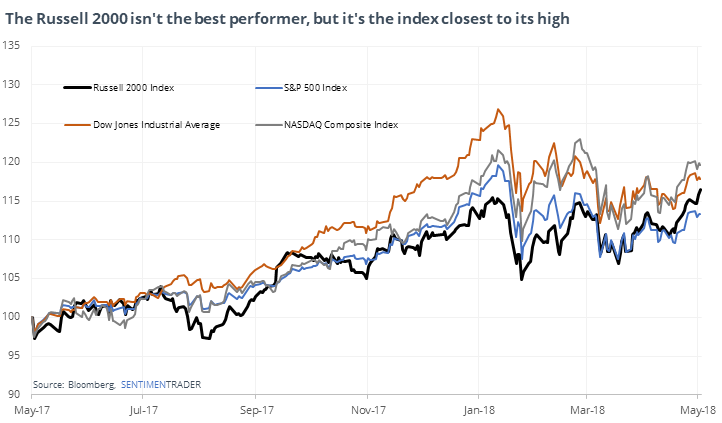 Other times it led to new highs, it was an inconsistent sign for stocks, especially the Russell itself.

An 18-year low in Staples’ weight

Consumer Staples have been bettered while other sectors have taken up the slack. The sector now accounts for less than 7% of the S&P 500, its 2nd-lowest weight since 1990. As a ratio to the Consumer Discretionary sector, it also hasn’t been this neglected since 2000.

The Energy sector has had only one loss in the last two weeks, and that one was tiny. It has also notched a fresh 52-week high, capping the best run in two years.

Breadth is getting overbought

We’ve already seen that the Advance/Decline Line is at a new high, mostly a good sign for stocks. The last two weeks have seen a minor thrust, with the 10-day average of the Up Volume Ratio exceeding 60%, moving into overbought territory.

The post titled Small Caps Lead As Staples Lose Relevance And Energy Can't Lose was originally published as on SentimenTrader.com on 2018-05-18.