Traders who tend to buy into declining prices spotted an opportunity over the past week. Hedgers in the major equity index futures contracts covered nearly $19 billion of their short position, one of the largest one-week changes ever. 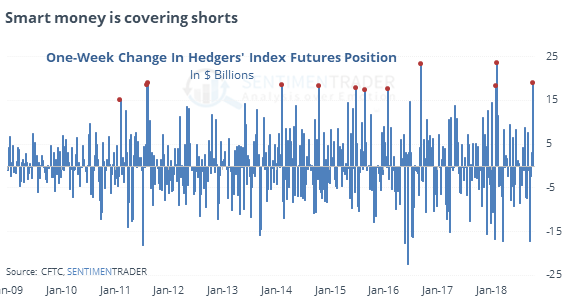 That has preceded good returns for stocks.

Investors who tend to sell into declining prices also spotted an opportunity to reduce their risk. Equity funds saw an outflow of more than $17 billion in the past week alone, one of the largest we’ve seen in years. Such large one-week flows led to excellent returns for stocks. The different between these two sets of flows was nearly the largest in a decade, all prior ones leading to a rally for the S&P 500.

The Shanghai Composite closed at a 52-week low on Thursday then had an outside day reversal on Friday. Of the 13 other times it’s done so in its history, it led to a positive return three months later 11 times.

The post titled Smart Money Moves In As Dumb Money Leaves was originally published as on SentimenTrader.com on 2018-10-22.