The end of April means that stocks enter the “worst six months” period. Being invested in stocks only during the May – October period resulted in almost no gain since 1950. 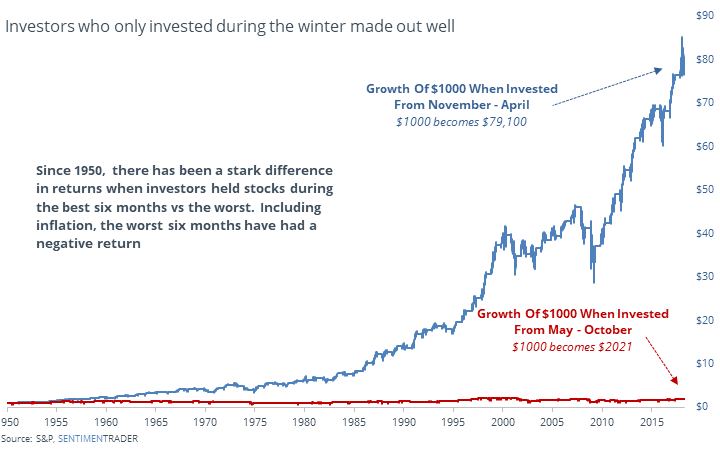 When the S&P was down YTD through April, then the worst six months got even worse.

On a shorter time frame, large commercial hedgers have gone net long DJIA and Nasdaq 100 futures contracts, the most in a decade. Since the 2009 low, the Dow has returned an average of 9% over the next two months, with gains every time. The Nasdaq 100 has averaged gains of more than 11%, with no drawdown.

“Smart money” hedgers added to their positions in 30-year and 10-year Treasuries, to a new record in the 10-year. According to the Backtest Engine, in the past decade when hedgers were net long more than 17% of the open interest in 10-year futures, the TLT fund rallied 90% of the time over the next two months, averaging +4.8%.

The post titled Starting Position Of Worst Six Months As Smart Money Buys "Stuff" was originally published as on SentimenTrader.com on 2018-04-30.