The right sectors aren't leading us out of the bottom

One of the ways to see if the rebound is sustainable is to look at the sectors leading out of the decline. Through the first week, it wasn't very encouraging, since the sectors that typically lead out of true bottoms weren't leading then.

A concern popping up now is noted by the Wall Street Journal:

This has been a common refrain. Because big tech stocks did so well leading up to the peak, and several of them have done so well lately, then it suggests we haven't really seen the kind of rotation that marks the end of bear markets.

Let's look at "false" bottoms. These are times when the S&P 500 hit a 52-week low, rebounded for at least 20 days, then fell to a lower low at some point in the following months. 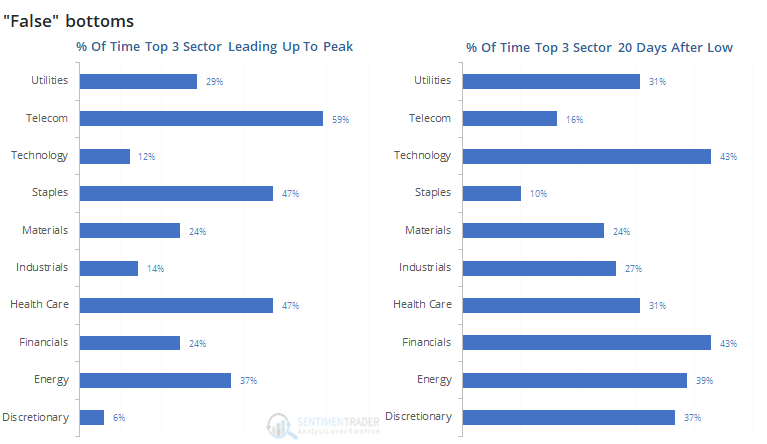 In the year leading up to the peak before a bear market, defensive sectors had a strong tendency to be leaders. When stocks bounced during failed rally attempts, there was a lot of variance between sectors. Tech and financials tended to lead out of the lows, but other sectors were more represented than during "true" bottoms.

The kind of sector leadership we've seen over the past 20 days is more like "false" bottoms than "true" bottoms, but it's not a huge edge. Overall, the idea that sector leadership should rotate when coming out of a bear market is not supported by evidence going back to 1928.

The post titled The right sectors aren't leading us out of the bottom was originally published as on SentimenTrader.com on 2020-04-22.