Tightest Cluster Of Small-Cap Weakness Since '99

The S&P 500 took a breather over the past week or so, at least until Tuesday’s jump. It didn’t decline much, but the choppiness was enough that most stocks in the index fell below their short-term moving averages, and suspiciously few of them managed to keep making 52-week highs.

For a day when the S&P was within spitting distance of a new high, it's highly unusual to see so few of its stocks trading above their 10-day moving average. 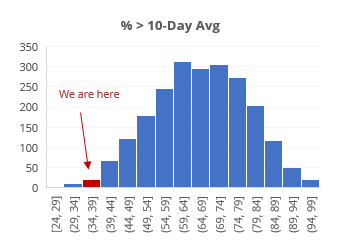 Going forward, the S&P’s returns were below random on all time frames, and the risk/reward was negatively skewed, especially over the next three months.

Among all sectors and indexes we follow, the most extreme readings in breadth or sentiment are in the Mexbol index of Mexican stocks. Recent sessions have triggered a number of extremes, and further weakness on Tuesday likely furthered those extremes. The market is getting very close to “puke” levels of panic.

We’ve focused a lot on a split in the market which has developed in recent days. Now 4 of the past 5 sessions on the Nasdaq have triggered a Titanic Syndrome, a new high in the Composite followed quickly by more 52-week lows than highs on the exchange. Per the Backtest Engine, a 5-day average of 0.8 or above (meaning at least 4 of the last 5 days) has triggered on 95 days, after which the Composite rose during the next 2 weeks only 31 times.

The post titled Tightest Cluster Of Small-Cap Weakness Since '99 was originally published as on SentimenTrader.com on 2019-07-24.