Monday’s selling pressure was enough to push many stocks to 52-week lows. Coming within a week of a day when 52-week highs dominated, this triggered another set of warnings.

If you can get past the silly names, and focus on what they’re saying, it’s worth noting since they’re designed to highlight periods when there is heavy turmoil underlying the mask of the indexes. While the origin of the signals include data-mining, they've been "in the wild" for decades and have been just as effective.

That doesn't mean they're perfect - they failed to precede any weakness in early 2017 and late 2019. But they have a long history of preceding dangerous market conditions, with poor risk relative to reward up to 6 months later.

Tech - a more volatile sector than the broader stock market - has ended its uptrend, at least by one definition.

Some traders use the market's RSI and whether the RSI is above or below 50 to determine trend. The NASDAQ 100's RSI is no longer above 50 after the longest streak ever above 50: 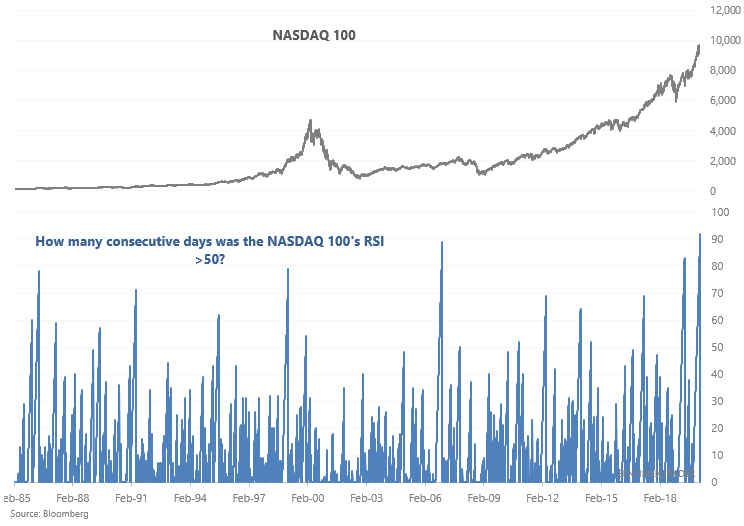 When similar streaks of bullish momentum ended, the NASDAQ 100 usually chopped sideways or fell over the next 3 months. But after that, strong momentum usually beget more gains, and it was especially positive for the broader market, defined by the S&P 500.

The post titled Warnings spike as complacency ends was originally published as on SentimenTrader.com on 2020-02-25.