In response to the historic selloff last week, we published the longest report since Christmas Eve 2018 that details many of the developments in price action (with context), wholesale selling pressure, and changes in sentiment.

We have no idea what will happen with the coronavirus. All we know is that investors behave in a generally similar way at certain points. And when looking at the decline through a variety of prisms, there was a consistent medium-term outlook. It says little about the very short-term (except to expect volatility) or the long-term (several similar environments morphed into bear markets).

Over a little over a week's time, the S&P 500, Dow Industrials, and Russell 2000 all fell below their 200-day averages. With its late recovery on Friday, the Nasdaq Composite remained the only one of the "big four" indexes to hold above its average, which is relatively unusual.

It suggests either (or both) that investors still believe in tech's growth story or (and) that tech has had a bigger run than the other indexes.

Volatility expectations and other technical factors are part of the CNN Fear & Greed model. Our proxy of that model dropped to maximum pessimism on Friday with a reading of 0%. 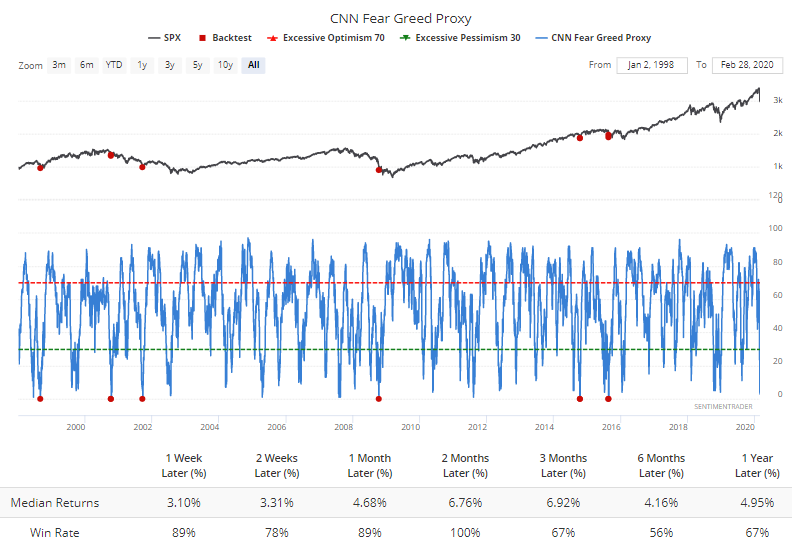 Our model doesn't exactly match the one on CNN's website since we use a slightly different input for the high-yield bond market. That allows us to generate much more history, and include it in our custom Backtest Engine for clients.

All the other times this model dropped to zero since 1998, stocks rallied over the next two months according to the Engine.

The post titled What a week was originally published as on SentimenTrader.com on 2020-03-02.